Kent Carlomagno's love for aviation has been since he was a young child of five cruising in the baggage compartment of an Ercoupe standing over the controls between his Dad and best friend.  Kent soloed at the tender age of 16 and waited until thirty-one to get his pilot's license. 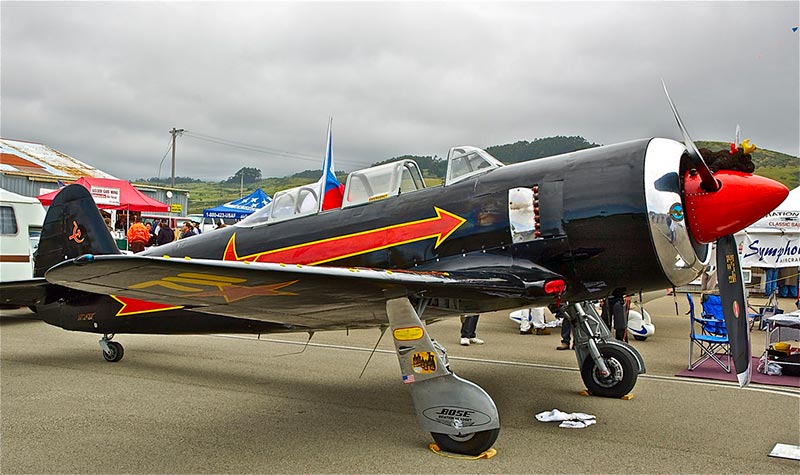 After attending the Reno Air Races in 1976 and Madera Air Show in 1983, he became obsessed with the quest of possible ownership and flying of World War II aircraft.

His first aircraft was an X-P.Q.-13 or military designed Ercoupe painted in the silver with red, white and blue stars and stripes. He flew this to and in air shows from 1988-1994.

In 2001, he bought a third rare aircraft, his YAK-11 "BLYAK MOOSE" and will be showing it at this year’s Pacific Coast Dream Machines Show, April 30 at Half Moon Bay Airport.

The YAK-11, nicknamed The Moose by NATO, was manufactured between 1944-1955. It was designed as a fighter / trainer and derived from World War II fighters such as the Yak-3 and Yak-9 which use inline engines.

The original Yak-11 was the equivalent of our American T-6 Texan trainer because the original Russian engine sported 700 horsepower on take-off and 570 horsepower at cruising speed; however the YAK-11 had superior performance to the T-6 due to less weight and wing design.

The YAK-11 has always been regarded as one of the quickest, nimble handling fighters designed in WWII, and for that reason it allowed the Russians air superiority against the German BF-109 in Barbarosa and other air conflicts.

While it is no longer a front-line aircraft, the Yak-11 has gained a new lease on life as a popular "warbird" thanks to its World War II Yak-3 lineage.