With over 15,000 built by North American Aviation and less than 200 flyable or restorable, the P-51 remains one of the most recognized airplanes in the world. Many credit the airplane for being the reason the Allies won the air war over Europe with the ability to escort bombers all the way to Berlin and back. After seeing Mustangs escorting B-17's, one Luftwaffe commander said, “When I saw Mustangs over Berlin, I knew the war was lost.” 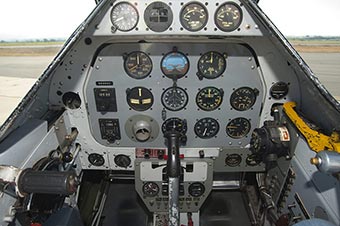 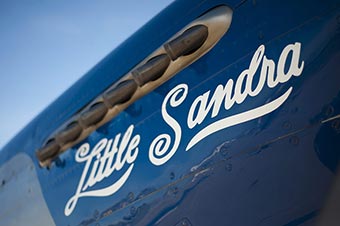 P-51D art on crew chief side

California Warbirds has maintained and operated N5460V since the late 1960's. Over the years, StrawBoss has worn different schemes but is currently painted as the mount flown by 328 Fighter Squadron/352nd FG, Col. James D Mayden. Mayden had 2 air victories, 4 ground kills and commanded the 352nd FG from July 1944 to September 1945. The right side "Little Sandra" is painted as the crew chief side, while the left wears "StrawBoss 2".

See this historic, world-class warbird at this year’s Pacific Coast Dream Machines Show, April 25 from 10 a.m. to 4 p.m. at Half Moon Bay Airport.

California Warbirds Air Museum: Preserving the Past, for the Future.

California Warbirds Air Museum was originally founded in 1969 as the Oakland Air Force. Now based in Hollister, California, with the support of numerous individuals and donors the museum has been able to educate the public through the display of our aircraft all over the west coast for 40+ years. As the custodians of a P-51D and AT-6D aircraft, the museum’s mission is to honor those have fought for our freedoms and to educate future generations on the importance of these historic aircraft, the veterans who flew them, and those who supported their efforts.