The World War II Warbird that Changed the Game

It is 11 a.m. on the 11th day of the 11th month in the year 1918. At this precise moment, in a railway car some 50 miles northeast of Paris, French and British allies formally accept the surrender of Germany. Four of the most unearthly, hellish years in human history come to a close. The Great War, the “war to end all wars,” is over.

From this day forward, November 11th will be formally recognized as Armistice Day (renamed “Veterans Day in the US in 1954), a somber day to remember the millions of young men from myriad nations who gave their lives in the conflict.

Fast forward to June 20, 1940. That same railway car is once again positioned in those same picturesque woods outside of Paris. Again, representatives of France are present. As is Adolf Hitler. It is with the deepest satisfaction that he exacts his revenge from 20 years earlier. Back then, he was a mere corporal. Now, he is the supreme leader of the Third Reich. And France has fallen. The City of Light is now occupied by Nazis.

Fortunately, we now know that the end game went far better for France than for Hitler. And one of the reasons is North American Aviation P-51 Mustang. Even the sleek, twin-jet Messerschmitt 262s could not best the Mustang.

The P-51 was a plane of “firsts.” It was the first single-engine plane based in Britain to penetrate Germany after the fall of France. It was first to reach Berlin, and the first to go with the heavy bombers over the oil fields of Romania. It was first to make a major-scale, all-fighter sweep specifically to hunt down the dwindling Luftwaffe.

Harry S. Truman was so impressed with the Mustang, he declared it “the most aerodynamically perfect pursuit plane in existence.” 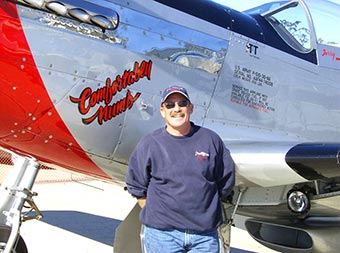 Terry Tarditi, owner of his own P-51, understands the ongoing love affair flight aficionados have with the Mustang.

One of the greatest joys Tarditi has enjoyed since purchasing his P-51 from David Gilmore of Pink Floyd is giving rides to World War II vets who actually piloted Mustangs during the war.

“It has resulted in some real tear-jerker moments, “ Tarditi acknowledges. “I mean, these guys are the real deal, and there aren’t that many of them left. I think about them at the age of 18, going out on a mission, a real life-or-death situation. I mean, this thing is like a giant lawn dart. It can kill you in an instant if you’re not careful. So yeah, I have huge respect for those guys.”

A few years back, he took Tuskeegee Airman Leo Gray up in the air. 90-years-old and mentally fit as ever, Gray suited up in the authentic garb, including parachute. As he settled into the tiny plane, he breathed in.

“Ah, you never forget the smell of that Merlin engine.”

Catch Tarditi and other P-51 Mustangs at this year’s Pacific Coast Dream Machines Show, April 30 from 10 a.m. to 4 p.m. at Half Moon Bay Airport. 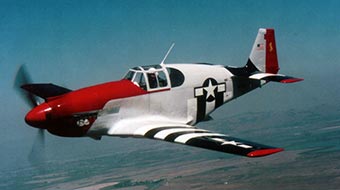 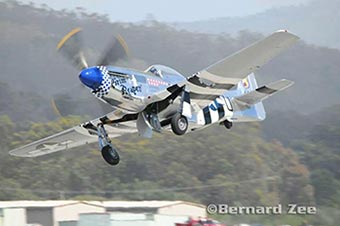 Among the historic P-51 Mustangs on display at the Dream Machines Show are:

Steven Coutches' H-model Mustang is one of the amazing "must-see" warbirds at this year's Dream Machine Show. It was the last of the production Mustangs – only 555 were built compared to 15,000 of the the earlier airframes. Coutches' historic beauty is the only one flying in the world of the 9 airframes remaining.

Kent Carlomagno’s showing his rare P-51A, "Magnificent Obsession II". This 1972 Marcelle Jurca French design hybrid is a scaled down ¾ scale model of the early P-51A with a 3-blade design propeller aircraft with over 66 hours on it and lots of TLC. It was completely rebuilt and dyno-tuned by Thunder Mustang builder Ryan Falconeer in 2002.

Sal Rubino’s P-51 Mustang, “The Grim Reaper”, fought in Europe during World War II. After the war, the plane fought with the Swedish Air Force and Dominican Air Force from which it was retired. It was purchased by an American collector in the early 80’s and transported to South Dakota where the owner was unable to finish the restoration. Rubino purchased the P-51 in 1998, did a restoration and painted it in the colors of the 9th Air Force, 355th Fighter Squadron, flown by famed Fighter Ace Colonel Lowell Bruland who had 12.5 kills to his credit. The plane is still actively flown in air races including Reno where Rubino and “The Grim Reaper” took first place in the Unlimited Silver Class 2015.