What crazy man concocted the sport of unimotorcycle racing? 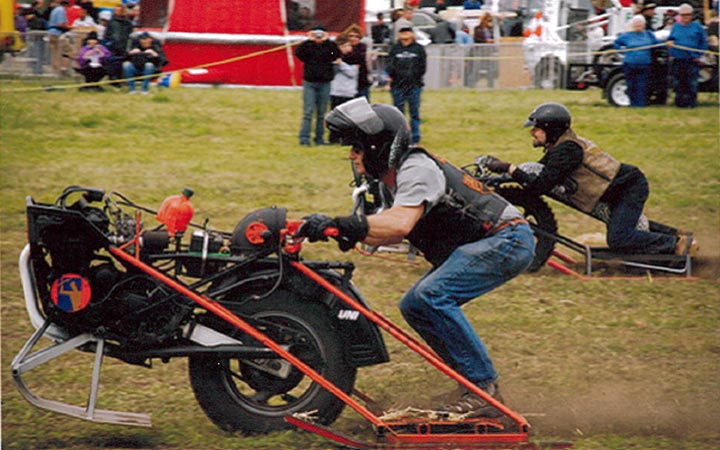 Popular in Europe, Unimotorcycle Racing can now be seen at the Pacific Coast Dream Machines show

Legend has it that these two motorcycle riding buddies walked into a bar in Daytona Beach, Florida. After a couple of brewskis, one guy turns to the other. His voice full of despair, he says, "You know, I've raced four-wheeled vehicles, three-wheeled vehicles, and two-wheeled vehicles. What's left?"

It may sound like the beginning of a good joke. But in the late 1980s, that's exactly how the sport of unimotorcycle racing got started.

That night, the gang at the bar filled several cocktail napkins with sketches, scribblings and ideas that officially launched the Unimotorcycle Racing phenomenon.

Several years ago, Moss Beach resident Jim Holsman attended the Unimotorcycle Racing World Championship in Holland. Holsman was hooked. He was determined to help spread the word about unimotorcycle racing and helped make it a popular part of the Pacific Coast Dream Machines Show. “There’s nothing quite like unimotorcycle racing,” said Holsman with a twinkle in his eye. “It’s great to see the passion people have for it.” 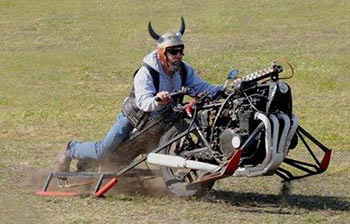 Unimotorcycle Racing heats will be held periodically throughout the event. For inquiries and entry information, call Jim Holsman at 650-712-0100.

The concept of unimotorcycle racing is to travel, from a standing stop, 100-feet on one wheel with the winner determined by fastest time. Races are held on dirt to minimize the injuries from the crashes that may occur. Unicycles in competition are limited to 4’ in width and 8’ in length.

Fans can check out the action at this year's Pacific Coast Dream Machines Show, April 25 at Half Moon Bay Airport.

"It's very big in Europe with the Germans, Belgians, and Dutch," explains unimotorcycle devotee Thomas Ingraham, a resident of El Granada, and co-organizer with Holsman of the races at the Dream Machines Show. "Here, the sport is a little more organic."

Unimotorcycle racing is the grown-up version of popping a wheelie on your favorite childhood bike. Picture the usual motorcycle: then take away the front wheel, add some modifications for speed, a few more for safety and stability, maybe a few bells and whistles for some pizzazz, and ... you're off!

"You're up on the back tire during the duration of the race, so obviously, there's no steering," says Ingraham of the straight track. "And these things really move. The fastest guy has done 100 feet in 2.5 seconds."

Speed is, of course, the primary reason people love the sport. But for Ingraham, there's a second component—the camaraderie that occurs when a team of guys get together, sharing all they know about physics, geometry, and good, old-fashioned mechanics to build a winning bike.

"There will be about five or six teams from throughout the Bay Area competing at the Dream Machines Show," he says. "We all know each other. We all share knowledge and swap parts. Don't get me wrong; each of us wants to win. But we're also great friends trying to promote a really unique sport and have a good time while doing it."